After too many long days, and too much bickering among your team, you’ve decided to search for a new job. Of course, being the tech genius you are, you found yourself another gig no problem. It seems like it’ll be a good fit both for your skills and personality, and the benefits? Well, they’re stellar. With resolve, you go to your manager, and tell them that you’ll be leaving in two weeks. Then they do the unthinkable. They beg you to stay, and produce a competitive counteroffer. So what you do?

Why you shouldn’t accept a counteroffer:

1. Others’ perception of you will change

You may have been their star employee, someone your manager loved, but once you accept a counteroffer? You can forget being teacher’s pet. Your manager will know that you thought about leaving, and they’ll start viewing you differently. They’ll question your allegiance, and whether you’re planning on leaving anytime soon. You’ll be the dark horse they don’t feel they can trust, an outsider of sorts. This shift in office dynamic often makes the technologist who considered leaving wish they had.

2. Your manager may be covering their bases

When you give your two-week notice, your manager panics a bit. They start to wonder how they’ll ever be able to finish this sprint and stay on schedule if you leave. They know that they don’t have time to train someone to take your place. So they counteroffer. They give you more responsibility, or more money, anything so that you’ll stay and get this software out of the door.

While they may have given you more money or responsibility, it doesn’t mean that they’re not viewing you differently. Even though you’ve stayed, expressing an interest in leaving will forever cause them to question your loyalty.

Their fear that you’ll leave has unfortunate consequences; they’ll often start training someone to replace you. They’re covering their bases so that they’re not without talent if you decide to change your mind and leave. What this means, however, is that if there are budget cuts, you’re likely to be the person on the chopping block. Accepting a counteroffer often puts you at the bottom of the ladder, and makes you vulnerable to being without a job in the future.

Why were you looking for another job in the first place? Were you sick of your 80-hour weeks? Your manager’s style? The team dynamics? Whatever your problems were, they aren’t going to be solved with this counteroffer. Sure, you may be making more money, but is it worth it if you have to put up with the same work environment, one that caused you to look for another role in the first place?

Odds are, you’ll be looking for another position in a couple of months regardless of the raise or promotion. And this time? You’ll have burned your bridges with the company that was going to hire you last time around ….

4.  Bridges will be burned

You don’t get a counteroffer unless you’ve gone to your manager to tell them that you’ve accepted an offer with another company. This means that by accepting the counteroffer, you are reneging on your agreement with the new company, an action that doesn’t go over well. In the future, the new company will know who you are, and remember your actions. If you want a job with them in the future, you can forget it. They’ll be afraid that you’ll just renege on them again.

By accepting a counteroffer at a company you’re not truly happy at, you’re limiting your future career options with a company with which you could be truly happy. Don’t you want the fairy tale?

The counteroffer is obviously appealing enough to make you want to stay. But you’ve got to ask yourself, “Why didn’t they give this to me before? Why didn’t they give me the raise or promotion until I threatened to leave? And what does that say about the company? That they won’t let my career grow unless they’re threatened? Is that really a company I want to be working for?”

If you have to ask yourself these questions, it’s probably time to move to a new company, one that will give you what you need in terms of both career and personal development.

While it may be tempting, don’t accept the counteroffer. If you do, you’ll not only be burning bridges with your current employer, but also with an employer that can give you what you want. Accepting the counteroffer sets you up for long days at a company you don’t care for, one that isn’t helping you to grow. And that, my friends, is misery, is it not?

Have you ever accepted a counteroffer? Did it have any negative implications for your career? Let us know in the comment section, or join the conversation on Facebook, Twitter, Google+ or LinkedIn. 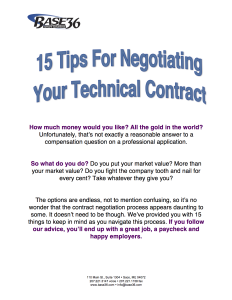 Thanks to lucidtech and quinn.anya for the use of their respective photographs.